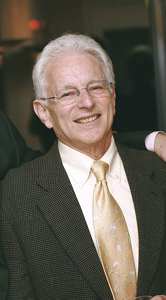 Marvin Kahan has been active in the New York theater community for over 40 years. Marvin graduated from the American Academy of Dramatic Arts and spent a year as a player with the Classic Stage Company. As the Artistic Director of TRG Repertory Company, Marvin was the director of over 20 productions, including a revival of You Touched Me by Tennessee Williams. He’s directed numerous productions including Danny and the Deep Blue Sea at the Edinburgh Theater Festival, and has worked as a Guest Director at Wagner College on Staten Island and St. Bart’s Playhouse. Marvin was Artistic Director for the Director’s Company and the Harold Prince Musical Theater Workshop, a board member for Gayfest, and is currently the Chairman of the Board of AMAS. He was formerly a partner in MJM Productions with Michael Jackowitz and Josie Abady, the partnership that produced Abyssinia and AVOW.